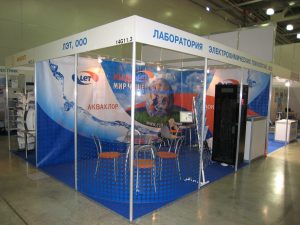 A new generation electrolysis plant “Aquaoxidant” was presented at the largest industry exhibition in the CIS and Eastern Europe “eCwatech-2012”.

This series will be produced together with well-proven installations of the aQuachlor series of various modifications, which LET has been producing since 1998. The most modern domestic and foreign technologies have been implemented in the development of Aquaoxidant equipment, the wishes of operating organizations (more than 80 Russian water utilities) and foreign partners have been taken into account.

During the exhibition, a number of contracts for the supply of equipment were signed, meetings with friends and colleagues were held.